JoAnne and I woke early yesterday and took the hour or so drive to the City of Cypress, a nice little Burg quaintly nestled between Long Beach and Anaheim. Sort of. It is arguably the flattest city I've ever seen.

Traffic was light and we arrived early enough to find a convenient parking spot. We strolled over to the bib pick-up tent. There we plenty of volunteers and everything appeared well organized.

I pinned on my bib, found the Cal Coast Team Canopy and introduced myself. This was my first run with the team since joining back in May. I headed out for a warm-up and met some of the CalCoast 60+ Teammates.

It was overcast, humid, and starting to get a bit warm. Not having raced in a while my plan was to hit mile 1 in 6:45 and hopefully not faster than 6:30. Then see how it felt. I headed over to the corral, listened to the National Anthem, and we were off. The 5k, 5k Walk and 10k started together. After navigating a few who misjudged the starting pace and a couple of baby strollers, I was able to run in the clear. The course was the 5k loop x2.

I had no idea who my age group competition was so I tried to catch every runner that, well, looked my age. I had plenty of company throughout the 5k. As I approached the 5k finish/10k split I spied a fellow that turned to continue the 10k. He appeared to be of my age so I pressed down a bit to close the gap. A younger, younger than me, runner was with him. As we passed the water station they both grabbed a cup. I went around hoping to gap a bit. They came back. At about 3.5 I decided to go and see who was going with me. After a bit I no longer heard footfalls behind me. My race portion lasted from mile 3.1 to mile 4, more or less. I ran the last 2 miles pretty much alone save for the walkers.


Overall it was a decent run for me. I could have pressed a bit more during the first 5k, but I'll take it for a first race in a couple of years. And it was a good to meet the team prior to the start of XC. I'd really rather be on the trails that on the roads.

After running couple of cool-down miles, we went over to the results table. Laptops were provided where you could type in your bib number and viola, results appeared. I picked up my bling.

We took the 91/15 south drive back to Murrieta and after a shower headed over to 8 Bit for a delicious Hefewissen. 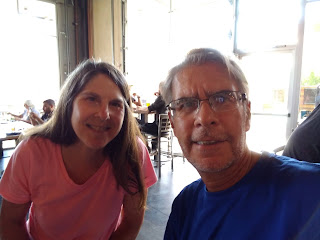 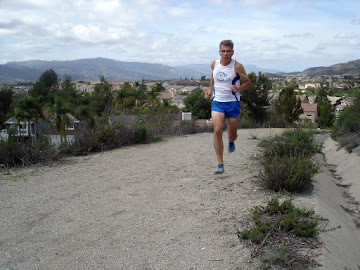